Here’s a handy site that gives you details to decipher your 6 digit model code.

It’s in Dutch but I’m sure you’re clever enough to translate it! 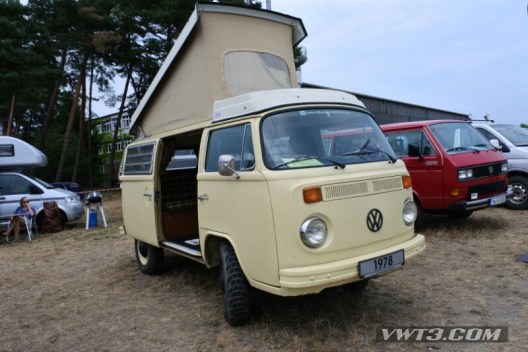 Ever wonder how when you give a part number to the parts guy where you buy your spares that he manages to know roughly what it is? Yes, some parts guys have been doing this for years and they do actually remember part numbers no matter how long they are, or some can quickly deciper the sting of numbers and letters quickly in their head, here’s how.

Below is a diagram of a breakdown of a part number and what the groups of letters and numbers denote.

You will notice that when you see the numbers printed on parts, listed in VW’s parts programme “ETKA” or found on websites that they are usually displayed in groups of 3 characters. Theres a good reason for this, not only does it make it easier to read but the batches are related.

The first batch of characters give you the vehicle the part is fitted to, they are abbreviated versions of the VW models codes. When the part is a component of an engine or a gearbox then this batch gives you the engine or gearbox type.

The second batch give you the area on the vehicle the component is fitted, the first character of the second batch is the “Main Group” such as engine, suspension, body etc then the 2nd and 3rd characters are the sub group.

The third batch is then the sequential number, these numbers cannot be deciphered nor do they mean anything.

So, as vehicle productions takes place then issues with parts start to happen and the part will get modified or replaced, these changes are noted with a letter after the 9 characters of the part number for example..

There is another batch of numbers not listed above and it’s another batch of 3 again and this is a colour code for items such as trim where physically the shape is the same but there is a choice of colour you would see “01C” for black items, “90V” for saddle brown items. All this information is stored within VW’s parts programme “ETKA”

Here follows some codes that are relevent to T3 models.

yes, we know t3’s werent fitted with 028 series engines from the factory but we just thought it prudent to add it in as it is such a popular series of engines that are installed in t3’s

Now for the Main Group and Sub Groups.

Interesting article on maintenance costs for T3 (in German)

Sometime in the early 80s VW started phasing out the old trusty “fuse box” and replaced it with what VW would now call the “Central Electrics”.
Not only did they do away with the old, unreliable ceramic fuses they also designed a standard item than could be used across the whole VW range and adapted to suit the model it was slotted into.

This part was fitted into a whole manner of VW’s Golf, Jetta, Caddy, Corrado, Passat as well as the T3.
As time goes on, technology changes and problems arise once parts have been fitted for a length of time, car manufacturers are constantly modifying and changing their inventory, you may find that the part numbers or control numbers have changed but any VW dealer or spares supplier will be able to advise you of any supercessions.
VW as well as identifying relays and control units by their part number they also used printed codes on the visible face of the relay or control unit, these are marked in the column “Control No”

I bet you’ve done it.. Bought a van and something was broken! We’ve all done it, it’s only a small part, maybe something like a window seal or a door mirror. Next stop the internet and try and find said broken part, then it starts!
You bought the van as a Type 25, that’s what all your friends call them, that’s what they are called in adverts, in magazines, the internet forums and the Facebook groups, so what are all these parts advertised as T25, T3, Vanagon, Volksiebus, wedge, brick, Bulli, Type 2… hhhnnnnnngghh, which is correct?

Let’s rewind to around 1950 when VW started production of their new van, what we now know as a split screen. VW already made a car, the Beetle, this was known as a Volkswagen Type 1, so what do you think they called their second vehicle? yep, a Type 2!
Fast forward to the 1961 Frankfurt motor show and VW release their 3rd vehicle, guess what that’s called? yep, Type 3!!
Paris motor show, 1968, guess what’s next? yep, Vw’s 4th model and yeah, you guessed it this was called the Type 4.

The first generation of VW Transporter or Type 2 lasted until 1967 when it was replaced with what’s colloquially as the “Bay Window” due to the shape of it’s wrap around front windscreen. Here lies the first identity crisis, 2 different vans made by the same people, both called the same thing and how to differentiate between them? hhmmm.

A T4 is the 4th Transporter and the 5th a T5, simple really.

T for TRANSPORTER and not for “type”

Right, come 1980 we have a problem, not only did VW bring out our favorite piece of Hannovers finest but they also changed the format of how VINs (Vehicle Identification Number) are recorded and here I believe is why we ended up with a few different names for what is the same thing.

All car manufacturers need to put an identification number on the frame somewhere and VW were no different and in the latter part of the 70’s they were using a 10 digit format, the first 2 digits of the 10 gave you some indication of what the vehicle was by way of an abbreviated version of the model code and the 3rd gave you the “model year”, which would be 7 for a 1977 manufactured vehicle for example ( VW model years actually ran from 1st of August to 31st July and not 1st of Jan – 31st December as you would expect, a vehicle manufactured in say September 1976 would actually be a 1977 model year, no idea why, probably some reason for that, I don’t know the answer, sorry!)

An example VIN from 1980 would look something like this.

See the first 2 digits? hmmm you thinking what I’m thinking?

At some point in 1981 European vehicles manufacturers were obliged to adopt a standardised 17 digit ISO system and the VIN number changed to the format we still use today, something like this.

A certain amount of info can be buried in the VIN which we won’t go into too much detail here but you’ll notice that there’s a “25” in there again?

Right, to explain this further we have to rewind again.
You know we talked about Type numbers earlier? right, there are subdivisions of these type numbers, The Model code is actually 6 digits long and has been for as long as I can go back, this code can be deciphered against some tables and you can work out what engine and transmission the vehicle had, maybe which country it was exported to and if it was left or right hand drive.

The abbreviated Type numbers used for the T3 were..

So, this brings us on to the next silly thing,

This is plain daft, you can see from the above that all pick up type numbers/sales codes/model codes start with 24, so, you could say I own a type 24 pick up, well, you could but not really as if you look back through VW type numbers for “split screen” T1 models you’ll note that a Type 24 is actually a microbus deluxe, or a Samba!

A little game now, spot the odd one out..

So, to round up, don’t get your T’s and your Types mixed up.

Here’s a nifty little website and a great little gadget to unlock a lot of information about your van.

On every VW T3 that left the factory there 2 white paper stickers, one was fitted to the inside the first page of the service book and the second was placed in the cab. The position they were fitted in changed from van to van but on right hand drive vans they were usually fitted on the metal cross member above the pedals, the left hand drive vans had them in the footwell near the A pillar.

If you still have your sticker intact then enter the information into the following website and decipher what all those letters and numbers actually mean!